Cloudinary is a fantastic cloud service for storing, serving and transforming images and videos. However the documentation for uploading an image or video from the browser, in a secure fashion, are pretty poor. The various examples are scattered around the place, and none of them shows, in one place how to

I had to patch it together for myself, and thought it’d be useful for you all.

As we near the end of this decade, and more importantly the end of the hell that was 2020, I realised two things. First, I survived catching Covid-19, and secondly that I had a good story about the history of Silicon Valley that I’d never written down. I’m still functional, so here, for perpetuity, is my tale.

Back in 2013 I was working in the Ads Interfaces organisation at Facebook, building mostly front end products (other people did the AI, database etc). We had an application called Power Editor which was the kitchen sink of products, and 25% of all Facebook revenue depended on it working. Every single thing you could do with ads on Facebook was supported in Power Editor (we called it P.E. for short). This made it huge, hugely complex and pretty user hostile. However our big spending customers were forced to use it as it was the only way they could efficiently scale – PE had a lot of cool tools for duplication, permuting your ads and working in batches of thousands of changes.

By 2013, PE was creaking under its own weight (about 150k lines of front end JavaScript), and no one wanted to work on it. We had half of one (awesome) engineer supporting it, and she could just about keep it working. I was looking for an opportunity to become a manager, and my manager Brian and I decided that building a team to properly support PE would be a good idea.

This became a closely held secret in Facebook Ads leadership. We didn’t want to take any chance that word our this vulnerability could get back to Google. They had already deprecated WebSQL, and other browsers had removed it. They would have been well within their rights to just flip a feature flag in Chrome and do the same.

We quickly put in place a team of 5 engineers and one PM to work on it, with me managing it and coding probably 75% of the time. The plan was fairly complex. There was no easy way to get us off of WebSQL without a full rewrite of 150k lines of JavaScript. We couldn’t just build a new application from the ground up, that would take years to support all the features, and Google could turn off WebSQL at any time. Also, PE was falling apart – it was blocking the entire company from shipping any new ads products at all.

So, we decided to first make it not fall apart with a lot of performance and reliability work. Next, we had a long running project called PE Live, where we took each subset of code and made it read from the live API rather than locally from the WebSQL database. To unblock the other teams we would rewrite the whole thing in ReactJS, whereas it was then built using two frameworks that we had sunset called UkiJS and BoltJS.

This whole process took over three years. By the time it was complete in 2016, we had improved Power Editor so much, with better features, more stability, speed and ease of development for partner teams, that over 50% of all Facebook’s revenue was spent through it. The team grew to 13 engineers, with lots of help from dozens more across the Ads organisation building new APIs and infrastructure to support our work.

Google could have killed it at any time, and there were no complete alternatives for our customers – some third party applications existed, but they were even buggier than PE, were always late with new features (we didn’t have to wait for a new API to be public, they did), and often each specialised in a subset of the features. 50% of our revenue disappearing over night could have happened. That it didn’t and that we moved mountains of code doing the horrible, inglorious work of rewriting hundreds of thousands of lines of spaghetti code in production while people used the product, while also building an infinitely better product, is the most satisfying period of professional work I’ve ever been fortunate enough to experience.

A huge thanks to all the amazing people I worked with on that crazy project, you’re the best team I ever worked with, and I’d hop into the trenches with you again any time!

[Edit: So this ended up on the front page of Hacker News, and there’s much more conversation about it over at https://news.ycombinator.com/item?id=26086056 ]

When you have a HTML form with multiple submit buttons, if the user hits their Enter button, it’ll submit the form and pretend that the first submit button in the form was clicked. Given that the button can have name and value attributes, the server can use this information. For example:

Unfortunately it’s not always possible to put the button you want to be default first in the DOM. A common hack [1] is to use CSS to either float or absolutely position the default button to appear where you want it. In this case you can put a hidden button at the top of the form that is a duplicate of the one visible to the user, e.g.

This works well, except in mobile Safari. It seems that because the duplicate button is hidden, the browser ignores it when the user hits Enter. To fix this, instead of using style=”display: none”, absolutely position it off the screen, e.g.

And there you have it, a nasty hack to work around the fact there is no way to explicitly specify the default button.

I recently shipped a fun Chrome extension called Gitmeme.  It brings joy to your code reviews on Github by making is easy and fun to add Gifs and memes to your comments.

Get it from https://gitme.me today!

A painfully wasteful discovery today was that, when you are using Firebase Functions to serve your code, it strips all cookies from the request object.  The only hack around this is to use a specially named cookie, “__session” and fit any data you need into that.

For example, in the browser

and on the server

At Promise, we’ve built some good infrastructure to let us move fast, and I’ve written a post about one of the most effective: getting a 15X speedup in our testing framework.

At Promise Engineering, we’ve open sourced our code that does intelligent SMS message splitting.  It can do useful things like ensuring messages are split on a space character, and that template tokens are never divided across messages (e.g. an address).

Get it on NPM at https://www.npmjs.com/package/sms-splitter

See the source code at https://github.com/PromiseNetwork/sms-splitter

Read more about it at https://medium.com/promise-eng/intelligently-split-sms-messages-with-sms-splitter-4f3c4d0cc4ec

Authentication to the Google Cloud, as well as uploading to it, is quite simple when using Google’s Cloud services SDK.  A big downside of using these with NodeJS is that they bring 80MB of dependencies, which if you are packaging your application for distribution is a little bit crazy.

Authentication to Google Cloud’s HTTP JSON API (link) can be a bit tricky in Node, as you need to construct your own authentication token, cryptographically sign it, and make sure you’re using all the right data, serialized just so.  I’ve written a small tool, linked above, to do this authentication for you.

Uploading to Google Cloud’s Storage uses the authentication token, and takes a few other parameters that are easy to get wrong.  The tool also does the upload of a simple file to a Cloud Storage bucket that you have the private key for a service account.

Using the code is simple (see the README) 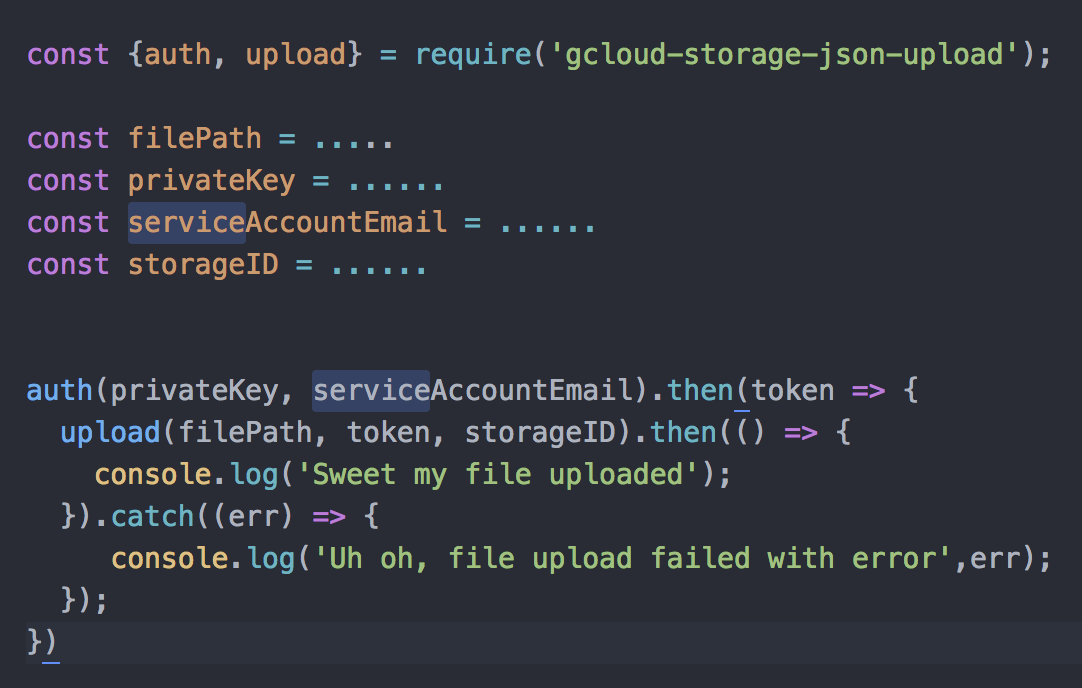 Please let me know if you’d like any additions or find bugs in the issues tracker.

Over the years I’ve found myself following a near identical workflow with Git, and I finally got around to making shortcuts for these common tasks.

You can find these all in a Github repo at https://github.com/shaneosullivan/git-shortcuts, where it makes it quick and easy to work your way through many modified files, `git diff` them, `git add` them, `git add` many files with similar names (like images) and more.

Pull requests welcome, what do you find useful and why?

A little tip for using React types, such as React.Node or React.Element with Flow.  If you import React into a component like

then Flow will give you the error

Cannot get React.Node because property Node is missing in object type

The fix is to import React as follows

import * as React from ‘react’;